Anthony Broadwater was exonerated this past November by the State Supreme Court after having fully served his 16-year sentence for a May 1981 rape he did not commit. He was originally charged with the first-degree rape and sodomy of a then 18-year-old University of Syracuse freshman, Alice Sebold, author of the now 1999 bestselling novel “The Lovely Bones,” a story recounting this horrific experience.

Broadwater was found guilty of these felonies and sentenced by an Onondaga Circuit Court judge to serve from 8 to 25 years on his convictions in the New York penitentiary. He ultimately served 16 years behind bars, being released on December 31, 1998.

It was not until a former discredited lawyer, now filmmaker, Timothy Mucciante, became the producer of a proposed 2021 movie called “Lucky,” a story about Sebold’s 1999 memoir, recounting the traumatic rape she had suffered as a teenager at the hands of Broadwater, or so she thought.

However, in the research he did to prepare for the film, including reading the trial transcript and reviewing the lack of physical evidence in the case, Mucciante reached a different conclusion. He found that the judge in the case had actually spoken off the record privately to the victim before his verdict was made. This was a clear ethical violation by the judge. Then, the judge had taken just seconds after the trial was completed, without any reflection or review of the evidence, to convict Broadwater, then a 20-year-old African American man and former Marine.

Most tellingly, Mucciante found in his review of the evidence that Sebold never positively identified Broadwater at a pre-trial lineup of suspects in the case. Rather, she identified her assailant as a man standing next to him, who was glaring at her.

Five months later, when Sebold randomly passed Broadwater on a Syracuse city street, she immediately called police, telling them that she was now sure that Broadwater was her assailant. He was promptly arrested and charged. A prosecutor then coached her as to what to say to the trial judge based upon her prior misidentification. Broadwater was destined for a life behind bars for a crime he did not commit. 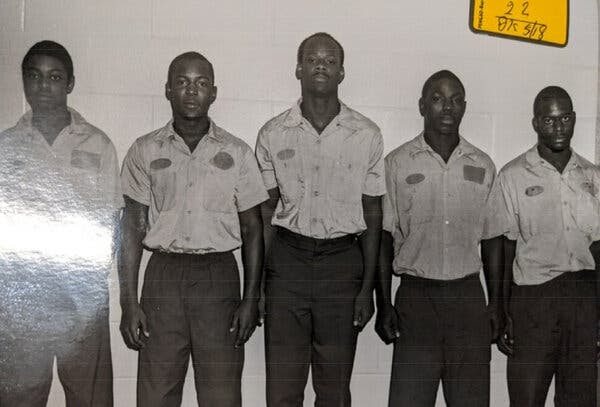 Ms. Sebold could not identify Mr. Broadwater, second from right, in a police lineup held after she saw him on the street. Instead, she picked the man on the far right.  Credit…Onondaga County District Attorney

In 2021, Mucciante was so sure that Sebold had chosen the wrong man that he stopped progress on the “Lucky” project and hired a private investigator to look into the case further. Further investigative work confirmed Broadwater’s avowed innocence. Sebold was now not so certain that he was the rapist. After all, she had a clear memory that her rapist was right-handed, when Broadwater was a natural lefty.

Unfortunately, no DNA analysis was ever done on the semen recovered in the case.

The investigator further found that Broadwater had an alibi defense for his case. He forgot to tell his public defender, and this lawyer forgot to independently check, that he was working a shift job with other fellow workers on the day of the crime.

When all of this evidence was presented to a new attorney, he promptly called the then-current Onondaga District Attorney, William Fitzpatrick, who joined in a new motion to the State Supreme Court to vacate Broadwater’s conviction. Justice had been finally served after almost 40 years.

After the case was vacated, Mucciante decided to rename the movie he had begun to make on Sebold, “Unlucky,” to reflect the life and wrongful conviction of Broadwater.

As a final editor’s note, studies show that eyewitness identification cases, such as the use of police lineups and showups, especially those that are cross-racial, make up a large percentage of erroneous convictions, where no DNA evidence otherwise exists.

Also, It should be noted that hair comparison evidence has since the mid-eighties been discredited as unreliable science, that can match little beyond a perpetrator’s race.

Story as reported by: CNN